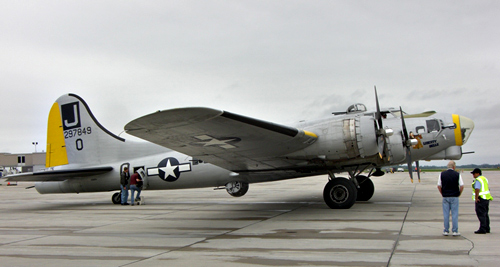 Historic warplanes from World War Two will land in central Iowa today as part of the Wings of Freedom Tour.

Michael Dober is tour coordinator for the Collins Foundation, an organization dedicated to preserving “machines that helped build the world and keep it free.”

“They have the P-51 roped off but the B-24 is the last fully restored flying B-24 in the world and the B-17s, we’re down to seven that are restored and still flying.”

Dober says the rare planes are educational for the younger generations while they’re a special treat to a select group of older American heroes, the veterans who served aboard them and flew them.

“My father-in-law, when we first started this, he got stick time on the B-24,” he says. “He just loved it. He went from 75-years-old to 18-years-old. It just brings back a lot of memories.” Dober fears organizations like the Collins Foundation, which offers rides on vintage aircraft, could have their days numbered.

“The F.A.A. is putting a lot of regulations or trying to get these grounded,” he says. “They are trying to make them static displays and that will pretty much end the program. Donations are what keeps them in the air.”

The Wings of Freedom Tour will be at the Ankeny Airport, just north of Des Moines, today through Friday. There are admission fees for the ground displays and much higher fees to fly in the warbirds.