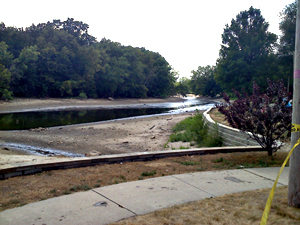 Myers Lake shown Thursday after being drawn down in the search effort.

An F.B.I. dive team equipped with highly-sophisticated sonar devices is expected to arrive in Evansdale today to search Meyers Lake for the two young girls who went missing one week ago.

Officials found the bikes of eight-year-old Elizabeth Collins of Evansdale and her cousin, 10-year-old Lyric Cook-Morrissey of Waterloo, by the lake.

Black Hawk County Sherriff’s Department chief deputy, Rick Abben says the specialized equipment will let them be 100 sure the girls are not in the lake.

“This is some specialized equipment that is now available…we had sonar here on the weekend and that was showing nothing, but this stuff is being brought in by the F.B.I. and they’re saying that this is some really high-tech stuff. There’s are only just a few units of this stuff in the whole United States for us to use and it’s coming this way,” Abben explains.

He says they stopped draining the lake Thursday at the request of the F.B.I, so the divers can do the search. “I’m being told that this lake has got some really deep pockets in it. Somewhere between 15 and 20 feet deep. I also was told a little while ago that the lake is now down about five feet. So when you drive out there it looks like it is down quite a ways,” Abben says. 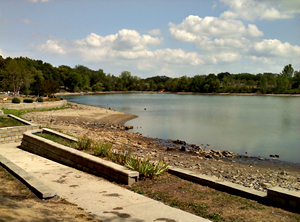 Another look at Meyers Lake.

Meanwhile, the aunt of Lyric Cook-Morrissey says an attorney has advised the parents of the older girl to stop talking to police and the media about the case and not to take anymore polygraph tests.

The parents, Dan and Misty Cook-Morrissey, both have criminal records related to drug crimes.

Abben says their decision to no longer cooperate with investigators could make the “missing persons” case more difficult to solve.

“We’re requesting everyone participate and assist us a hundred percent. It makes it a distraction for us when people decide to do things other than cooperate other than 100 percent,” Abben says.

“However it’s their choice how they wish to proceed with that. It’s a distraction for us, but we will continue to work the case.” It’s not know exactly what time the F.B.I. divers will begin working at the lake.