You are here: Home / News / Bike riders to roll out of Sioux Center Sunday 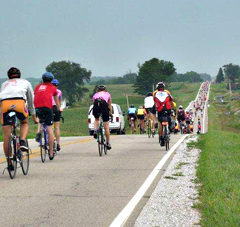 The annual weeklong bicycle trek from one end of Iowa to the other begins Sunday in the state’s northwest corner and concludes on the banks of the Mississippi River next Saturday.

Director T.J. Juskiewicz says Sioux Center is the starting point and the town will be packed with pedaling people. Juskiewicz says, “We sold out back in April, over 10,000 people, but we’re expecting upwards of 20,000-plus that’ll be in town that day.”

The cyclists will travel through 52 Iowa communities over next week. The forecast is calling for more of the same hot, dry weather that’s hung around the past few weeks. Juskiewicz says the bikers should be ready to handle the heat.

Over the seven days, the overnight host cities are: Cherokee, Lake View, Webster City, Marshalltown, Cedar Rapids, Anamosa and Clinton. Juskiewicz says they have at least 50 volunteers in each town along the way, rolling out the red carpet for the thousands of cyclists, some from as far away as Australia and Japan.

“There’s just people that have been living and breathing RAGBRAI for six months, making sure that everything is taken care of,” he says. The daily routes between the cities range over the week between 42 and 85 miles. Some riders add on to the routes for what are called “century loops” so the daily totals reach 100 miles.

Learn more about the ride at: www.ragbrai.com