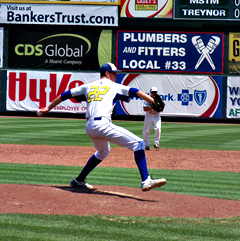 J.D. Nielsen on the mound.

Martensdale St. Marys opened its bid for a third consecutive state high school baseball title with an 8-2 win over Treynor in a Class 1A quarterfinal today in Des Moines.

“I was just trying to get it over the plate and let my defense do the work,” Nielsen said. “Our bats came out firing, so it’s pretty easy to pitch when you do that.” 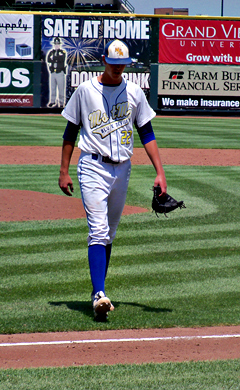 “I thought we had a good plan in place to wear (Chapin) down and in this heat, it’s going to be tough for anybody to go an entire game,” Dehmer said. “Our bats came alive, they made a few mistakes and we capitalized.” The temperature in Des Moines topped out at 104 degrees during the game.

Dehmer said his team re-focused its attention on a third state title after having their 88-game winning streak snapped by Des Moines East back in May. The Blue Devils fell one victory short of tying a national record with their 88 straight wins.

Treynor coach Bob Mantell said it’s tough to win any game – but especially a state tournament contest – with six fielding errors. “That…is probably the tell-tale of the game,” Mantell said. “I mean, they swing the bat well enough anyway, so if you’re booting (the ball) around a bit and you’re not throwing strikes consistently, you’re going to face an uphill battle. That really hurt us.”

Treynor’s season ends with a record of 30-5. Martensdale St. Marys, at 38-5, advances to the 1A semifinals and will face either Algona Bishop Garrigan or Traer North Tama at 6 p.m. Thursday.

Despite the six errors by his team, Treynor coach Bob Mantell was quick to give credit to Martensdale St. Marys. “They had some good at-bats, they battled well at the plate, they’re a good team, there’s no doubt about it. But you know I’ll say this we weren’t intimidated by ’em.,” Mantell says. He says they just didn’t play well enough to win.