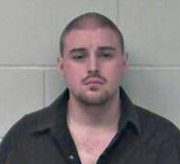 An Ottumwa man is in jail after police say he attacked three people with a hatchet. Ottumwa Police Lieutenant Tom McAndrew says officers responded to a disturbance call at the home of 26-year-old Charles Zwer at 7:40 p.m. on Sunday.

“When officers arrived, they found two or three people who were injured. One of the subjects was critically injured and transported to the hospital. He was later airlifted to (University Hospitals and Clinics in) Iowa City,” McAndrew said.

The victim’s names have not been released. The victim who was airlifted to Iowa City was reported in critical condition. A second victim was treated for “moderate” injuries at Ottumwa Regional Health Center, while a third person refused treatment. All three were struck with a hatchet.

“We did locate the weapon in the area and secured it. A short time later, we found Mr. Zwer in the area and placed him under arrest,” McAndrew said. Zwer faces a charge of attempted murder. Additional charges are pending.

“Right now, we don’t have any motive for what happened,” Lt. McAndrew said. “We’re pretty much in the preliminary stages of the investigation.” Zwer is being held in the Wapello County Jail on $25,000 bond.