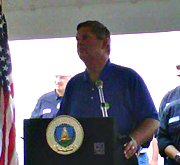 Vilsack announced Monday that virtually all farmland enrolled in the federal Conservation Reserve Program has been released for haying and grazing of livestock, plus haying and grazing will be allowed on Wetland Reserve Program easement areas in drought-impacted areas where it won’t set back conservation goals. Speaking late Monday afternoon at an event in Mason City, Vilsack said the condition of the crops nationwide is continuing to decline rapidly.

Vilsack is asking Eric Cantor, the Republican leader in the U.S. House, to bring the 2012 Farm Bill up for a vote immediately, as the bill that has passed the U.S. Senate and includes livestock disaster assistance programs.

“The majority leader Eric Cantor has suggested he has his finger on the pause button. As I’ve said many times, I wish he would take his finger off the pause button so I don’t have to put my finger on the panic button. I think producers are beginning to be concerned about this because we have until September 30th to have a new (Farm Bill),” Vilsack said. “…People say, ‘Well, maybe they could extend the existing (Farm Bill).’ The problem with that is it will not revive the current livestock programs.”

“The House, as I understand it, adjourned a day early last week because they didn’t have anything to do,” Vilsack said. “Well — Farm Bill, now. Pretty simple.”

According to Vilsack, speedy passage of the Farm Bill would provide farmers and ranchers with some “predictability” in the midst of all the uncertainty caused by the drought.

“They’re planning on taking a five-week recess,” Vilsack said of congress. “I don’t know of a single farmer who in the midst of harvest when there is work to be done stops the combine and says, ‘You know what? I’ll just take a couple of weeks vacation and the work can always get done later. This has got to get done and there is no better time to do it than now.”

Last week during a public briefing in the White House, Vilsack said he was getting on his knees every day and praying for rain. A leading atheist group took issue with Vilsack’s statement. The leader of the Council for Secular Humanism said Vilsack was sending the wrong message to distraught farmers by suggesting prayer was the best response. During an event Monday afternoon in Mason City, Vilsack was asked by a reporter if he had any response.

Vilsack visited Soy Energy in Mason City and spoke to members of the Iowa Biodiesel Board. Earlier in the day Vilsack visited the Cedar Rapids area and toured a farm near Center Point.