You are here: Home / News / Extreme heat leads to extra precautions at the state baseball tourney 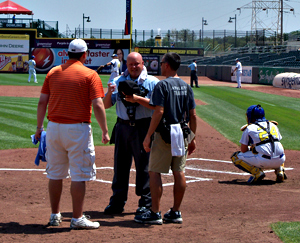 Umpire Jeffrey Corbett of Sully trying to cool off between innings at the state high school baseball tournament.

Iowans are being told to limit their time outdoors this week because of the extreme heat.

Despite the dangerous weather conditions, the State High School Baseball Tournament is being played in Des Moines without interruption.

“We have three trainers on duty who are in the dugouts,” Anderson said.  “(Two) are serving the teams and one is constantly watching the officials.”

The four umpires are at a higher risk for heat related problems because, unlike the players, they never leave the field during a game.

The home plate umpire is also wearing protective gear that adds to the heat stress. The trainers deliver bottles of water and towels to the umpires between every half inning. The umps can choose between a towel soaked in ice water or one dipped in ammonia. 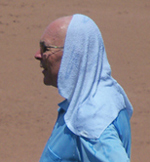 Umpire Gary Paulsen of Ogden uses a towel to cool down.

Anderson notes ammonia is a better cooling agent than ice and it also “opens up the respiratory system to help cool the body.” The umpires, who each work two games, also get a refreshing break between contests at Principal Park – home of the Triple-A Iowa Cubs. Des Moines has hosted the state tournament since 2005. 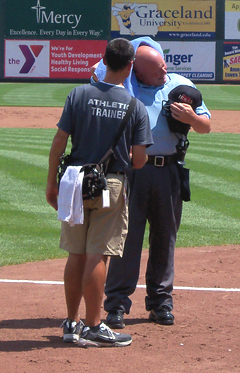 Trainers are closely watching umpires at the state baseball tournament to try and avoid any heat-related problems.

“In years past, we had plate umpires who couldn’t continue (because of the heat) when we played at Carroll or Marshalltown. The good news here is, between games, we have a facility where they can come and it’s air conditioned. The crew can shower before they go back out, so it gives them a great opportunity in the 45 minute break to cool down and be ready to go back out,” Anderson said.

The facilities in Carroll and Marshalltown, where the tournaments were held prior to 2005, did not include air conditioned rooms for the umpires. The temperature in Des Moines on Monday climbed to a record 105-degrees.

Highs are expected in the triple digits again today and Wednesday.