You are here: Home / Sports / Umpire retires after 40 state tournaments 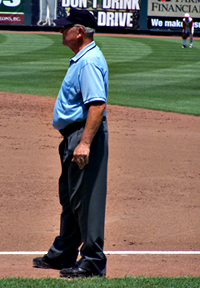 A central Iowa man who has appeared in more state high school baseball tournaments than anyone else stepped off the diamond for the final time Monday.

Gary Paulsen of Ogden umpired his last game during a record 40th appearance at the State Baseball Tournament. He’s been calling balls and strikes for more than five decades. Paulsen called his first game as a junior in high school, joining his father and uncle on the diamond.

“It’s been fun and I’ve actually been (umpiring) since probably 1957.” In addition to his family, Paulsen credits his long, successful career to good health and a lot of luck.

“My mother’s dad lived to be 94 and he was an active runner, so I think I have some of those genes in me,” Paulsen said. “I’ve been fortunate, other than one year I developed a blood clot during football season, otherwise I’ve been very fortunate to stay healthy.”

Paulsen is also an accomplished basketball, track and football official. He was inducted into the Iowa High School Baseball Coaches Association’s Hall of Fame in 1993.