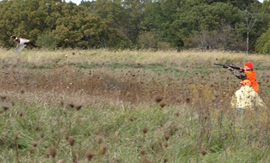 The Iowa Department of Natural Resources estimates 109,000 pheasants were harvested in 2011,  the fewest since record keeping began in 1962.

D.N.R. wildlife biologist Todd Bogenschutz was expecting the numbers to be low following five winters with above average snowfall and five wetter than normal springs.

“Was I expecting the harvest to be this much lower? No, probably not, I was figuring around 150,000 to 200,000 would probably be our harvest,” Bogenschutz said.

The estimate is based on a random survey of hunters. Harvest estimates were highest in northwest Iowa.

The D.N.R. will conduct a roadside survey over the first two weeks of August to gauge what hunters can expect this year. Bogenschutz is predicting a significant increase in pheasant numbers.

“Based on field reports from staff, seeing broods this year, obviously this is probably our best production year in the last six,” Bogenschutz said. “We had good winter survival of the hens that were there. That was key.” The 2012 pheasant and quail hunting seasons will open October 27.

“This second year, I would suspect maybe we’ll see both of those bump up. We’ll have some more hunters and that will lead to additional harvest,” Bogenschutz said. “Our staff is kind of learning the ropes on dove management, so we have a few more actively managed areas out there for doves that hunters can use.”

The 2012 mourning dove hunting season is tentatively scheduled to begin on September 1.