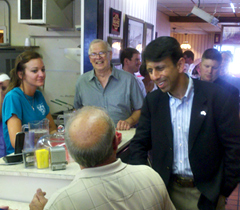 Bobby Jindal at the Maid Rite in Newton.

Two Republican governors considered to be on Mitt Romney’s list of potential running mates were in Iowa today, suggesting the election comes down to “two visions” for the country.

Virginia Governor Bob McDonnell made a stop in Davenport this morning, then he joined Louisiana Governor Bobby Jindal at a rally in Coralville early this afternoon. The two spoke with reporters on a telephone conference call afterwards.

Jindal made a solo stop at the Maid Rite in Newton late in the afternoon, speaking to about 30 people gathered around the diner’s counter.

“Who we vote for matters,” Jindal said.”It’s not about speaking styles. It’s not about personalities. This is about two very different visions for Iowa, for America and so I’m very grateful for you to be here today and I’d just ask you to make sure you talk to your neighbors, your colleagues, your family friends — everybody you know — about voting this fall and tell them why we’ve got to elect Governor Romney our next president, so we can get our country back on track.”

Jindal returned to that theme more than once, that the president and Romney hold “two different visions” for the country.

“In short, I think the president’s view involves a lot of class warfare, involves dividing us. I mean, really, I think it’s reflected in the Occupy Wall Street philosophy that perspective instead of celebrating people that are successful, demonizing people that are successful,” Jindal said. “Governor Romney’s got a different vision. It’s a vision about growing the private sector economy that says, ‘Look: You’re not entitled to your neighbor’s property. You’re not entitled to an equal outcome in this country. You are entitled to an equal opportunity.'”

AUDIO of Jindal in Newton.

Jindal’s remarks in the diner were brief — less than seven minutes — and sprinkled with humor. He joked a Maid Rite sandwich in his home state of Louisiana would be deep-fat fried. To drive home a point about the national debt, Jindal employed an anecdote about his daughter.

“She came home from school the other day and she had a button on. One of her friends had given it to her. She was wearing it. It said: ‘Please don’t anybody tell President Obama what comes after a trillion,'” Jindal said, and the crowd laughed. “You know, that’s kind of true when you think about it. This is not a sustainable path we’re on.”

Later, during an interview with Radio Iowa, Jindal brushed aside speculation about his chances of being Romney’s running mate.

“This election’s not about Joe Biden. It’s about Governor Romney and President Obama,” Jindal said. “I think there are going to be a lot of interesting storylines between now and Election Day that at the end of the day really aren’t going to be important when voters go into the voting booth and I think the v.p. speculation is an example of that.”

According to Jindal, the economy and the new “entitlement of ObamaCare” will be the deciding factors. Jindal’s headed to Florida Saturday on another mission for the Romney campaign.

“I think my role is to try to focus people on what’s important in the election, on the substance, to remind voters really what’s at stake here,” Jindal said.

Margaret Jorris, who voted for Rick Santorum on Caucus Night, was at the Newton Maid Rite to see Jindal. Just like Jindal, she doesn’t expect Romney’s choice of a running mate to sway many votes in November.

“I told this young man back here two nights ago at a Republican meeting, I said, ‘I’m not really for Mitt Romney, but I’m against Obama, so I’ll vote for Mitt,'” she said, laughing.

Another politician mentioned as a prospective GOP vice presidential nominee is scheduled to make an appearance in Iowa Saturday. Florida Senator Marco Rubio will be in central Iowa, but the Romney campaign hasn’t yet released details about the event.

Romney is in London right now to attend the opening ceremonies of the Olympic Games and meet with leading officials in the British government. Romney plans to visit Poland and Israel as well before returning to the U.S. at the end of the month.