You are here: Home / Education / ISU professor sees his work in the water at the Olympics 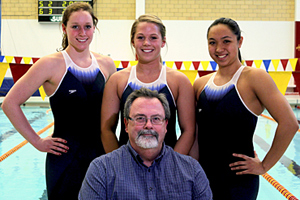 The 2012 Summer Olympics are underway in London and once again this year most of the swimmers will be wearing suits designed in part by a professor at Iowa State University.

The Olympics in Beijing were highlighted by a host of new world records in swimming and 94% of the gold medal winners in swimming wore the suit.

“I came into this with the fundamental notion that all suits slow swimmers down because they add drag,” Sharp said. “And if we can design suits that don’t add as much drag, then (a swimmers’) native performance capacity will be able to be expressed better. I think we were able to do that.”

New regulations for competitive swimwear were adopted in 2010, so Sharp and others were called upon by Speedo to develop a new suit. The result is Speedo’s Fastskin Super Elite Swimsuit. Iowa State swimmers, including Bri Carlberg of Stratford, tested the suit.

Carlberg said the form-compressing suit made her feel like she had a competitive advantage. “It’s a lot of mental…the suit doesn’t make you swim faster, it does, but it’s you that goes fast. It’s more of a mental thing and you feel so much more confident. You feel tighter in the water, faster and more compressed,” Carlberg said.

Sharp said he always feels a sense of pride and ownership when a swimmer succeeds while wearing one of his suits, but he noted the swimmer inside the suit remains the most important factor. “We’re realists – we know these athletes are elite and 99.9% of what they accomplish is due to the work and talent that they have – not due to the suit,” Sharp said.