You are here: Home / Agriculture / Iowa corn harvest to start in August (audio) 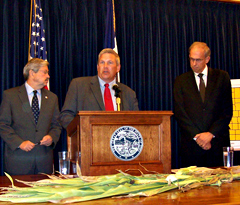 The state’s top agricultural official predicts the 2012 corn harvest will begin in August, far earlier than normal, due to the drought.

Although there’s a day left in the month, this is likely to be the fifth driest July since officials began keeping weather records 136 years ago.

Just 1.12 inches of rain has fallen, on average, in the state this month. That’s more than three inches below normal. This is also going to be the third hottest July in Iowa as well.

“The combination of those creates real, real stress on our crops out there, our corn and soybean crops as well as our pasture land, as well as water demand that you see in our urban and rural areas,” Northey says.

“Although those systems are being taxed and they’re producing record amounts of water, they continuing to meet demand,” Schouten says. “Some of them are looking to drill new wells. They’re looking forward, sensing their water levels are dropping, so they’re working with DNR to increase their ability to generate water.”

State officials are reviewing the rules and regulations for well-drilling, to see if there’s any way to speed up the permitting process.

Schouten and Northey spoke this morning at the governor’s weekly news conference. Governor Branstad last week lifted weight restrictions for hauling hay and the DOT started granting permits to farmers who want to mow ditches and bale the forage for their livestock.