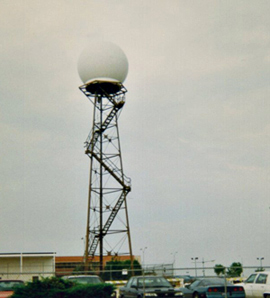 The Des Moines bureau of the National Weather Service is upgrading this radar with a new system.

The National Weather Service office that covers more than four-dozen counties in Iowa’s midsection is getting a major upgrade to its 1980s-era radar system this fall.

Jeff Johnson, the warning coordination meteorologist for the Des Moines bureau, says the upgrade will incorporate a new technology called dual-polarization, or dual-pol.

“What dual-pol does is, it allows us to have a better look at the precipitation to determine if it’s snow, for example, or if there’s a better chance for it being freezing precipitation, large hail and this kind of thing,” Johnson says. While helping to zero in on snowflakes versus rain, sleet or hail, the system will also be able to spot smoke plumes from wildfires.

The new technology will bring 14 new radar products enabling forecasters to more accurately predict things like rainfall amounts — and to pinpoint life-threatening situations sooner. “For severe weather, it has utility in seeing what we call a ‘debris ball’ aloft,” Johnson says.

“Anytime you have a tornado on the ground, it brings stuff from the surface up into the atmosphere as it destroys things. The radar can actually differentiate that and give us a clue something’s going on.”

Installation of the radar upgrade will take about two weeks, starting September 10th. During that time, the radar system will have to be shut down.

Residents across the region don’t need to worry, Johnson says, as his office has immediate access to other radar systems in Omaha, the Quad Cities, Sioux Falls, Kansas City, La Crosse and Minneapolis. “We get the job done looking at those radars, triangulating the information and seeing what’s overhead,” Johnson says.

“There’s actually a ‘cone of silence’ with the radar. For 15 miles out, we’re kind of blind straight up in the air so we use other radars all the time anyway to help augment the information we’re getting from our radar. It’s not a single isolated radar, it’s a network that works together.”

Johnson did not have a dollar-estimate for the upgrade. The Des Moines office covers 51 central Iowa counties.

Learn more about the radar upgrade at:  www.crh.noaa.gov/dualpol/index.php?wfo=dmx