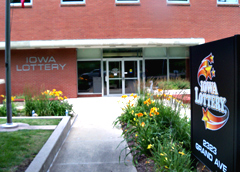 Preliminary budget numbers released today by the Iowa Lottery for the fiscal year that ended on June 30th confirm earlier projections that the lottery would finish with a record year in money turned over to the state.

Iowa Lottery C.E.O., Terry Rich, says they surpassed their goal for the year.

“We’re really feeling incredibly proud of the success we’ve achieved this year. It seemed like the stars kind of aligned to help us in the last 12 months,” Rich says.

“Our goal is to provide a base of 60-million-dollars in annual proceeds, and it looks like that is going to be $78.8-million his year. The reward in all that is additional dollars for education, for all sorts of good causes for the state of Iowa, including the Veterans Trust Fund.”

The money for the Iowa Veterans Trust Fund that Rich referenced was $12.7-million. The lottery saw an increase in sales for all of its products — with scratch tickets leading the way — jumping up over $23-million over last year.

“We had a phenomenal year in scratch tickets, and I think it was because we had so many winners that when winners win and people hear about it, more people play, when more people play, you have more winners,” Rich explains.

“The other category was the lotto category, which includes Mega Millions Powerball, Hot Lotto. And I think all the controversy over the Hot Lotto big jackpot where somebody won and then gave it back, and the a run on the Powerball when we introduced the two-dollar Powerball, and then the big Mega Millions (jackpot), all kind of aligned together to make it just a phenomenal year for the Lottery.”

Powerball sales were up over $10-million and Mega Millions sales were up over $7-million. Rich expects sales to remain strong in this new fiscal year. “We don’t see much let up. It’s kind of interesting in a recession, just like other recession, people are looking for simple pleasures, and the lottery seems to fulfill that bill,” Rich says.

The Iowa Lottery will hold a special drawing at the Iowa State Fair in August to give away the unclaimed money from two jackpots. Rich says that promotion should help keep interest, and sales of the lottery products up. The unaudited figures show that lottery proceeds to state for the just completed fiscal year were up 15.7% from the previous year’s total of $68.1-million.

The lottery’s combined sales from its core products of lotto, instant-scratch and pull-tab games increased 14.5% from the previous year’s total, which had been a record at the time.