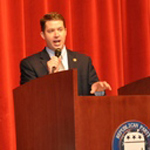 The chairman of the Iowa Republican Party has issued a “call to action,” urging Iowa voters to toss an Iowa Supreme Court justice off the bench.

In 2010 Iowans voted against three justices who were up for a retention vote and Iowa GOP chairman A.J. Spiker said today that Justice David Wiggins should suffer the same fate this November.

“I would encourage Iowans to send a message to unelected bureaucrats that they’re fed up and they’re not going to take it anymore,” Spiker said during an interview with Radio Iowa.

Justice Wiggins, the three justices voted off the bench and three other justices up for retention vote in 2016 all joined the Iowa Supreme Court’s unanimous decision that paved the way for same-sex marriage in Iowa.

“Do unelected bureaucrats decide what marriage is or do the people?” Spiker asked. “…Most Iowans and most Americans don’t want judges defining what a word like marriage means.”

Spiker accuses Wiggins and the other members of the Iowa Supreme Court of being “activist judges” who are “bullying” Iowans into living in a state where same-sex marriages are now legally recognized.

Wiggins himself has issued a written statement, saying he finds it “unfortunate that Mr. Spiker apparently thinks all three branches” of state government “should be political.” Wiggins also wrote that he’s “proud” of his work “in writing opinions and helping resolve the issues that are brought before the court.”

Connie Ryan-Terrell of the Iowa Interfaith Alliance said the GOP chairman has “crossed a line” by injecting raw politics into the judicial retention election.

“It is disappointing to me that Mr. Spiker and leaders of the party would use this as an opportunity to raise money,” Ryan-Terrell said during an interview with Radio Iowa.

Spiker sent an email to his fellow Iowa Republicans that included a request for donations to “advance the principles of the Iowa GOP.”

Read all the statements referenced above here.