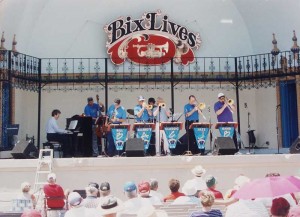 Jazz lovers from around the globe are headed to Davenport for the annual concert series honoring a local musician and composer — with one big change this year.

It’s the 41st annual Bix Beiderbecke Memorial Jazz Festival and for the first time, organizers are making the music more accessible to the public with free concerts.

Bix Society director Joe Hesse says there’ll be no charge for two nights of shows at the historic LeClaire Park bandshell on the Mississippi Riverfront.

“Friday and Saturday evening from 6 to 10 PM, we’ll have three live bands each night and that’s a free concert,” Hesse says. “The main venues will feature those bands and more.”

The first of the paid concerts starts tonight at 6 o’clock at the Davenport Rivercenter.

“Over the next four days, we’re going to have 12 bands playing multiple sets,” Hesse says. “The bands focus on traditional jazz from the ’20s and ’30s which is the era that Bix played in and really kind of changed the whole face of jazz.”

Beiderbecke played the cornet and piano and was considered one of the most influential jazz musicians of the era. He rose to huge fame before his death in 1931 at age 28.

Despite the music being some eight decades old, Hesse says it’s still very much alive and popular.

“It’s hot jazz, it’s fast, it’s got a great tempo, great mood, great feel,” Hesse says. “It’s different from what you hear in today’s market. I love today’s modern jazz, too, but this has a different feel and then when you put all of the folks together and the improvisation and the solos that happen, these guys are just phenomenal.”

Thousands are expected for the concerts from at least 34 states and nine other countries.

The jazz festival runs through Sunday. Learn more at www.bixsociety.org