You are here: Home / Education / Symposium underway on education leadership 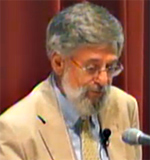 A symposium created by state education officials to talk about leadership in education got underway today at Drake University in Des Moines. Mark Tucker, the president of the National Center on Education and the Economy, was the first speaker at the Teacher and Principal Leadership Symposium at Drake University.

Tucker says the U.S. uses a 100-yearly system where the top performing students are given more attention to prepare them for the higher skilled jobs, while the other students got less attention. He says other countries that have outpaced the U.S. saw how the requirements for workers have changed and now seek to have the same standards for all students.

“They want the best basic skills in the world. They want high skills — or what the governor called complex skills — and they want them for everybody. And they want everybody to have capacity for creativity, including the technicians on the floor of the plant. That’s what they set out to do. And they realized that you can’t do that by tweaking the system you have, you have to have a new system, and that’s what they’ve been building,” Tucker says.

Tucker says Iowa now has to create a system that provides the kind of education formerly reserved for elite students to all students at no increase in cost. He stressed the point that he is serious about making the change at no increase in cost. “And we have to remember that we are the high cost country in the world. So what we actually have to do if figure out how to do that for less cost,” according to Tucker.

Tucker says the new system has to be “world class” from top to bottom. “That means your standards have to be world class, your curriculum has to be world class and matched to the standards,” Tucker says. “Your assessments have to be absolutely first rate and match to the curriculum and built on it. And by the way, there’s not high performance country in the world that uses computer-scored multiple choice tests, because they don’t believe that computer-socred multiple choice tests measure complex skills.”

The remark about doing away with computered scored tests drew applause from the audience. Hiring the best teachers, according to Tucker, also has to be part of the effort to implement a world class education system.

“In the United States we’ve had very high quality teachers for many, many years. We’ve had them because college educated women could nurses, secretaries or teachers, and many preferred to be home when their kids came home,” Tucker explains. “Right now there are more women than men in our law schools and our business schools and a number of other professional schools. The best of our women are not going into teaching. If we do nothing about teaching policy, if we don’t change not aspect of it at all, we are going to get the worst teachers in the history of the United States.”

Tucker says part of improving teacher quality is recruiting the best teachers like we recruit the best engineers and paying them like we pay the best engineers. The symposium runs throughout the day and includes other speakers and discussion panels on improving the quality of teachers and the leadership in schools.