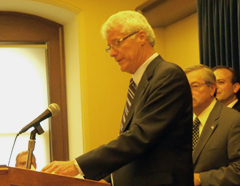 The president of the University of Northern Iowa plans to retire within the next year.

University of Northern Iowa President Ben Allen has told the board that governs the university he plans to retire “no later than July 1, 2013.”

Allen was Iowa State University’s vice president for academic affairs when he was picked by the Board of Regents to become UNI’s president in April of 2006. In late 2010, Allen took time off to undergo treatment for prostate cancer.

Over the past year, Allen has presided over a series of cut-backs at the school to eliminate a five-million dollar budget deficit. He laid off for about 40 professors and called for an end to a series of academic programs which had low enrollment. The closure of the K-through-12 Price Lab School on campus which had served a teaching and research tool for students and professors drew criticism, but the Board of Regents and Governor Branstad stood behind the decision and the school closed for good in June.

A written statement from the president of the Board of Regents praised Allen for his role in “leading U-N-I through significant economic challenges.”