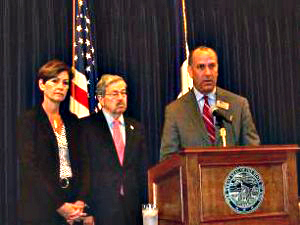 The author of a book that was the basis for the “Mean Girls” movie will deliver the keynote address at the summit. Paul Gausman, the superintendent of Sioux City Schools, will talk about getting communities involved.

“Sioux City is the fourth-largest district in Iowa with 14,000 students in about 30 different school facilities,” Gausman says. “I readily agreed to participate in this bully prevention conference because we are a district that has walked the journey of implementing progressive programming for bully prevention activities.”

A child bullied on a Sioux City school bus was featured in a national documentary called “Bully” that called attention to the prevalence of bullying.

“It’s created some really meaningful discussions in our community because we have to recognize that bullying is not simply something that exists in schools,” Gausman says. “It’s in our shopping malls, our sporting events, our churches. I mean, we certainly have all kinds of challenges in our society and the degredation of civility in our society is part of that and so we must together work to figure out how to solve this challenge so that we are appropriately modeling proper behavior for our children.”

This past April, a northwest Iowa teenager who openly admitted to being gay killed himself. His family says he was being bullied on-line and at school with gay slurs. Governor Branstad says it’s time to “do more to stand up to bullying” in Iowa.

“You know, we’ve had suicides. We’ve had some significant increase with cyber bullying here in recent years,” Branstad told reporters this morning at his weekly news conference. “All of those things, I think, led us to believe that we needed to have a high-profile summit and bring together some state and national leaders.”

Earlier this year a group of conservative Republicans accused Branstad of being a “puppet” for gay rights groups by continuing to sponsor a yearly anti-bullying conference for lesbian, gay, bisexual, transgender youth. Branstad, who is a Republican, angrily rejected that charge this past February and today Branstad said this fall’s summit will talk about the bullying gay teens say they go through at school.

The escalation of so-called “cyber-bullying” on Twitter, Facebook and in other social media is a topic Branstad hopes to have parents, teachers and legal experts consider.

“I don’t know if anybody has the complete answer to that and it’s relatively new, but we know (social media) has kind of exacerbated the situation and it needs to be addressed,” Branstad said.

A recent Iowa Youth Survey found half of the students in grades six, eight and 11 who were polled said they had been bullied at school. The “Governor’s Bullying Prevention Summit” will be held in Des Moines on November 27.  A new state government website has been created to share details about the summit and start registering participants in September.