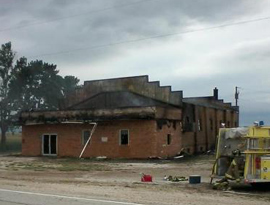 A central Iowa landmark went up in flames over the weekend. Firemen from five Webster County fire departments battled a fire that destroyed the historic Bohemian Hall located southwest of Fort Dodge late Friday night. The fire was reported after 9:30. By the time firemen arrived the dance hall was totally engulfed in flames.

Firemen from Callender, Gowrie, Harcourt, Moorland and Otho spent much of the overnight in extinguishing the fire. No exact cause has been determined with the State Fire Marshall called in to investigate. The Bohemian Hall was a popular dance hall from 1939 until the last dance in October of last year.