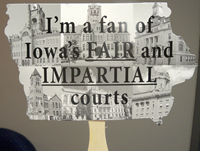 A majority of Iowa lawyers who participated in an Iowa State Bar Association survey favor a “yes” vote for all 75 judges and justices on November’s ballot.

“In the aggregate, the judges and justices received a 90 percent confidence rating on the question of whether they should be retained in office,” says Cynthia Moser, a Sioux City attorney who is president of the Iowa State Bar Association.

However, the Iowa Supreme Court justice targeted by a campaign to vote him off the bench because he signed onto the court’s 2009 same-sex marriage ruling got a lower score.

The Bar Association’s president says that same-sex marriage case was probably a factor in the score Wiggins got from Iowa lawyers who’ve taken cases before the Supreme Court.

“We certainly acknowledge that the controversy over the Varnum decision may have played a role in the responses,” Moser says.

“I think what the important take-away is that the majority of lawyers who did evaluate his performance voted or indicated that they believe he should be retained on the bench and that’s really the take-away that we think the public should have from this.”

The Iowa State Bar Association plans to be more active in this year’s retention election.

“I anticipate that we will be running ads. I think they will be positive and pro-active. They may also be responding to lies and inaccuracies,” Moser says. “…We are prepared and positioned to do that if circumstances arise.”

However, Moser says the ad campaign will not advocate for any one particular judge or justice, but for retention of all.

On August 1 the chairman of the Iowa Republican Party called upon Iowans to “send a message to unelected bureaucrats” and vote no on Justice Wiggins because Wiggins and other members of the court had “redefined” marriage in Iowa.

It’s likely the same coalition of groups that successfully campaigned to unseat three other members of the court in 2010 will wage a similar campaign against Wiggins. Moser calls Wiggins and the other 74 judges who’re on the November ballot “well-qualified” for that role.

“We don’t think that judges should be subject to those kinds of political pressures,” Moser says.

The Iowa State Bar Association chose an earlier release date for its survey charting the opinions Iowa lawyers have of judges and justices who’re up for retention. The group also has a booth at the Iowa State Fair to tout the state’s judicial system.

“We want Iowans to know that the judges standing for retention on November 6 are high-quality individuals and to a person they deserve to be retained on the bench,” Moser says.

Moser made her comments during a news conference this morning at the Iowa State Fair and the group has posted results of the survey online.

“We understand that the constitution gives Iowa voters the ability to vote for retention,” Moser said. “…Our hope is that by providing information to the public, people will be better-equipped to make an informed and intelligent decision about whether a specific judge or justice should be retained.”

Three Iowa Supreme Court justices were voted off the bench in the 2010 election. In 2011 Governor Branstad appointed three men to the court to replace those justices and all three new justices must face a retention vote this fall.