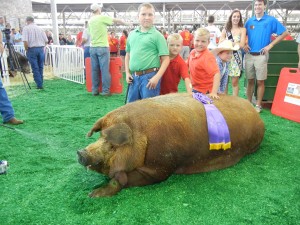 One “must see” every year for many Iowa State Fair-goers is the big boar. And – this year – they’re seeing the biggest boar ever at the fair.

Reggie was the last of seven supersized swine to waddle onto a scale before a big crowd gathered Thursday to witness the annual big boar competition. He posted a new Iowa State Fair record weighing in at 1,335 pounds.

Reggie’s owner, Rick Stockdale of Madison, Indiana, says his big pig is not too picky about his diet. “He’s a slop pig. He eats a lot of bread, Twinkies, Ho-Hos and donuts,” Stockdale said. “Then, of course, corn and produce. He’s a big fan of all the melons – watermelon and cantaloupe. He’ll eat virtually anything, except squash. He will not eat a squash.”

Reggie also holds the Indiana State Fair record for biggest boar. At five years old, the Iowa State Fair prize may be Reggie’s last. “This possibly was his last show, we don’t know. He is getting up in age,” Stockdale said. “We have his son…that is keeping the tradition alive.” 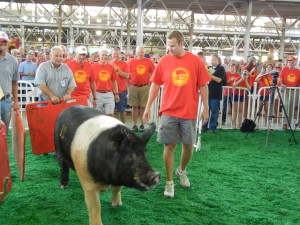 A giant pig with the number 32 painted on his side was quite the crowd pleaser – despite finishing third in the competition. Fred Hoiboar was escorted to the scale by Iowa State men’s basketball coach Fred Hoiberg. He was contacted late last year by some Cyclone fans who wanted to use the pig to raise money for charity. “When I heard that, it was a no-brainer for me,” Hoiberg said.

“It’s for a camp for kids with heart disease. I was up there last week to spend time with the kids and raise money for the organization.” Camp Odayin is located in northern Minnesota. Prior to Hoiberg’s return to Ames, he worked in the front office of the NBA’s Minnesota Timberwolves.

Hoiberg and dozens of others wore cardinal and gold t-shirts which feature a pig and a basketball. The group is selling the shirts to raise money for the camp.