You are here: Home / Sports / Drake quarterback on verge of setting record for passing 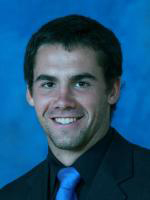 Drake quarterback Mike Piatkowski enters his final season as a Bulldog coming off a year where he was the Pioneer Football League Offensive Player of the Year. But the Wheaton, Illinois native would rather talk about the team and its goal to repeat as the PFL champions. He says they want to win the title outright and knows what it will take to do that.

“Just stay hungry, treat every game likes its a championship. We know we could have done better last year and we’re striving to just get better this year,” He says. Pitakowski needs 942 passing yards to become the top passer in school history. He has thrown for nearly seven thousand yards so far in his career. He threw for 2,934 yards in 2011, second most in school history in leading the team to a 9-2 record.

Piatkowski says it’s gotten easier to play the position as he has gained experience. “Just being in meetings and things like that, it’s definitely slowed down since my first year, and I’m just seeing the field a lot better than usual,” Piatkowski says. As for the personal records, Piakowski doesn’t mention them when asked about his goals for this season.

“Personally, I just want to win the championship outright and that’s about it, just win,” he replies. Piatkowski says being a senior doesn’t add any more pressure to perform.

“I try not to think about it too much,” Piatkowski says, “but its’ definitely there, just knowing it’s your last year, you definitely want to end on top.” Drake opens the season August 30th against Grandview.