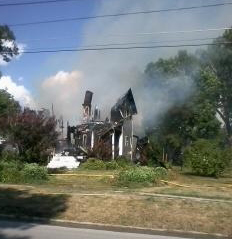 A firefighter was injured while fighting this fire in Jewell.

A firefighter was critically hurt fighting a house fire in the Hamilton County town of Jewell Thursday afternoon.

Jewell fire chief Duane Hendrickson said the firefighter fell through a floor inside the burning structure.

The fireman was then transported to Mary Greeley Medical Center in Ames, then on to a Des Moines hospital and later to an Iowa City medical facility.

The name of the fireman injured and his condition has not been released.

Hendrickson said the fire started at around 12:30 at the Bruce Marsh residence on Jewell’s Main Street. Firemen from Ellsworth, Jewell and Story City spent much of the afternoon into the evening fighting the fire.

The home has been declared a total loss. The cause of the fire has not been determined with the matter under investigation.