You are here: Home / News / King says critics of his stand on animal fights are “completely irrational” (audio) 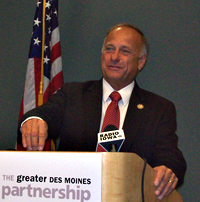 Republican Congressman Steve King says there’s been a “completely irrational” reaction to his opposition of a federal law that would ban animal fighting.

“There’s a political agenda that’s attacking me on a 24/7 basis,” King said early this morning during an appearance in Des Moines.

King blames “anti-meat organizations” for trying to “gin up” attention to his stand on the issue. King said dog fights and cock fights should be illegal, but state laws ban the practice and there’s no reason to pass a federal law on the issue.

“It comes down to jurisdiction. I mean, for example, we don’t have a federal law against murder. We have federal law against murdering federal officials.There has to be a nexus, a federal nexus. There’s no federal nexus in what goes on in an animal fight which, if they actually take place any more — I’m not hearing that they do,” King told two Iowa reporters early this morning. “Is there anybody that can give me a list of animal fights that have taken place in Iowa? No, they’re against the law.”

King also has wondered aloud why federal laws should protect animals from harm, but there’s no federal law against a sexual predator who would impregnate a 13-year-old, then take her across state lines and force her to get an abortion to get rid of the evidence of the crime. King has been ridiculed on cable TV for those remarks.

“This has been a completely irrational hyperventilation from the left,” King said. “If you look at the websites out there, most of those people who hit share on their Twitter or Facebook account, they don’t know anything about what the basis for this story is.”

This past week King was mocked on “The Colbert Report” on Comedy Central.

“I recall Steve Colbert testifying before the Judiciary Committee in the House of Representatives and obscenely insulting Iowans, so I don’t pay any attention to him anymore,” King told reporters this morning. “He’s in a separate league.”

Stephen Colbert stayed in character as a conservative commentator when he testified about migrant labor during a House committee hearing in September of 2010. Colbert and King clashed during the hearing.

AUDIO of King being asked about the issue this morning during his appearance before the Greater Des Moines Parternship.

AUDIO of King speaking with reporters from Radio Iowa and The Des Moines Register afterwards.