You are here: Home / Agriculture / Popcorn quality and price impacted by the drought 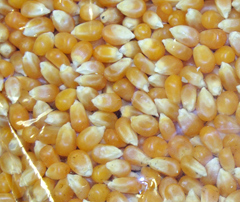 This year’s historic Midwest drought is having an impact on all crops — including popcorn.

Gary Smith is President of the American Popcorn Company, the parent company of Jolly Time Popcorn.

The company is based in Sioux City and has contracts with farmers in northwest Iowa and northeast Nebraska to grow the company’s popcorn.

Smith describes this year’s crop as “okay,” especially when compared with conditions in other parts of the country.

“There is going to be a popcorn shortage because Indiana burnt up in June even, I mean, they didn’t even get started. And we’ve got a lot of competitors in the eastern cornbelt,” Smith says.

Smith says about 90% of the company’s popcorn is grown under irrigation in northeast Nebraska. He says the dryland popcorn grown in the Sac City, Iowa area is in decent shape having received some rain in July that didn’t fall elsewhere.

Still, he says there may be some quality issues in this year’s popcorn. “I think the test weights will be down. When the test weights are down, then maybe your pops aren’t quite as good, we might struggle with quality issues, but that’s the way Mother Nature treats the product. And I’m just grateful we’re going to have a crop,” Smith says.

With field corn prices at or near all-time record highs, popcorn companies have to pay more to prevent farmers from switching away from popcorn production. Smith says the company is already paying record-high contracts to farmers, and he expects the contracts to be higher again next year.

He worries, though, about an eventual consumer backlash. “We’re at the highest point we’ve ever been because of the price of corn. Now with the drought, corn prices have rallied more, and so we’re looking at another increase, which is a big worry,” according to Smith.

“Because at some point, America’s consumer is gonna say ‘your products too expensive, I don’t want you any more,’ and I don’t think we’ve gotten there yet. But where is that threshold? I’m not absolutely sure.” The American Popcorn Company has been in business for 98 years.

Smith is a fourth-generation family member involved with the company.