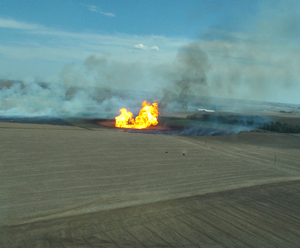 Aerial view after an underground natural gas line was struck in Plymouth County.

Two Iowa companies have agreed to pay fines in connection with cases where they each struck natural gas lines during construction after failing to call and have the lines located before beginning work.

“Two individuals working for DeRoucher were injured. They could’ve been injured much more seriously. They heard a hissing noise, started to run and escaped.”

Miller says the explosion blew the construction equipment into the air and left a massive crater in the ground. He says the same company flirted with danger in a second case.

“One week later, the same construction company dug not to far way, a half a mile away. Fortunately there was no catastrophe there, there was not pipeline broken. But, it was a case that we thought was particularly unusual given what they had been through just a week earlier,” Miller says.

The Attorney General says Patrick and Cynthia DeRocher have agreed to the maximum fine of $10,000 for each violation for a total of $20,000. In addition to that fine, Northern Natural Gas has filed a lawsuit seeking $439,273 dollars in compensation for what it says is for emergency response, inspection and repair, labor, equipment usage, gas loss, and third-party contractor costs while repairs were made to the damaged pipeline.

An aerial view of a crater created when an underground natural gas line was struck near Zwingle in eastern Iowa.

“They struck a 16-inch natural gas line owned by MidAmerican, there was a massive fire and explosion, fortunately no injuries, a large crater. As in the other case, the tiling equipment and construction equipment was destroyed,” according to Miller.

Donald A. Kunde agreed to a fine of $10,000 for that case. Ben Booth is the spokesman for “Iowa One Call,” the organization which Iowa law requires you to call before digging.

“These two examples just emphasize the serious nature of excavating near underground utilities. The primary point, the general purpose of Iowa One Call is to prevent this type of damage to the infrastructure which provides essential services to all Iowans,” Booth says.

He says professionals who regularly do excavation work should never have an excuse for not calling 8-1-1 to have underground utilities marked. But he says everyone has a responsibility to make the call.

“It’s very important that all Iowans understand that even the most simple task — such as pounding a stake into the ground — doing landscaping activities and landscaping procedures in your back yard, those are activities that constitute excavation under Iowa law,” Booth explains. “And the system is in place to safeguard the infrastructure and most importantly to safeguard Iowa communities.”

Attorney General Miller says the vast majority of people in Iowa comply with the law. “There are some exceptions, these are the exceptions. I think there’s only been on repeat violator in our state’s history. So compliance is generally good, but the exceptions can be very, very dangerous,” Miller says. The law requires that you give 48-hour notice of any digging so that underground facilities could be located and marked.