You are here: Home / Education / Governor and Lt. Governor ask students to Skype them 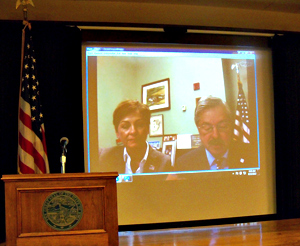 “As kids start picking up their school supplies, packing their backpacks, boarding the bus, we’re announcing a new initiative called Skype Your School, and hope that classrooms across the state will take part in this initiative,” Branstad said.

Schools that sign up can talk with the governor or lieutenant governor via Skype.

“We’re hopeful that students will find this to be fun, informative, and a innovative exercise,” according to Branstad. Lieutenant Governor Reynolds is leading the state STEM task force that seeks to improve education in science, technology, engineering and math. 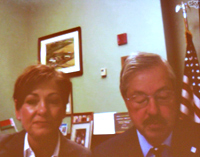 “We want students to continue to be excited about technology as well as civics and government, and we hope that our participation helps raise their interest level,” Reynolds explains.

“We’re excited to partner with Iowa schools to utilize a relatively new technology that is becoming more and more available to the general public, and that’s Skype.”

Reynolds said it’s easy to schedule a Skype discussion. “To request a Skype Your School classroom chat, teachers or administrators and students are encouraged to click on the featured image at the governor’s website, governor-dot-Iowa-dot-gov  (www.governor.Iowa.gov),” Reynolds said.

The governor and lieutenant governor have already done several Skype chats with students, and said they want to be sure that every school has that opportunity.