You are here: Home / Sports / Hawkeye linebacker Morris now experienced in how to handle preparation 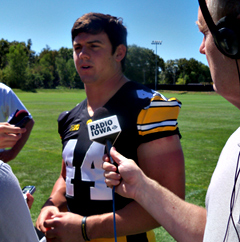 James Morris talks with the media.

Two years ago James Morris was thrown into the mix as a true freshman. Now, the junior linebacker is expected to be one of the leaders for the Iowa defense.

The Solon native started all 12 games a year ago and tied for the team lead in tackles.

“I just want us to be a tough hard-working Iowa defense, the way they played in the past when Iowa was going to BCS games and winning BCS bowls, that’s what I want, and that’s what everybody wants,” Morris says.

“And I just want people to know if they’re going to beat Iowa, we’re going to make them beat us, we’re not going to give them anything. That would be the biggest thing.”

There are several new faces on the defensive line this season but Morris says they are not approaching it like they are replacing anybody. Morris says everyone has a position and you can’t try to be something you are not, you just have to do your job. 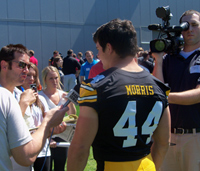 Morris says one benefit of having a few years of experience is he has learned how to take care of his body.

“These practices are extremely physical, we don’t practice like this during the season, so a lot of guys get nicked up in camp, so it’s just important that you take care of your body,” Morris says.

He says as a freshman your head is spinning and you don’t know how to manage things. Morris says with experience he is getting as much sleep as he can and taking care of himself in any way he can.