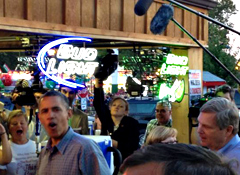 President Obama is headed to campaign rallies in Oskaloosa, Marshalltown and Waterloo today, after spending part of Monday evening at the Iowa State Fair.

“We’re not growing this economy like we need to. We’re not creating jobs like we can in America and that is why Mitt Romney and I have a plan for a stronger middle class, to get this country back on track, get this country growing jobs again and get us back on the path to prosperity in this country,” Ryan said early Monday afternoon.

Protesters heckled Ryan throughout his speech.

“We’re used to this in Wisconsin,” Ryan said nine minutes into his 12 minute speech, laughing, as his supporters chanted Romney’s name to try to drown out the protesters.

Obama arrived in Council Bluffs mid-day Monday and quickly took aim at Ryan, a Wisconsin congressman who is in his 14th year as a member of the U.S. House.

“What’s holding us back right now is Washington politics. You’ve got folks on the other side who think compromise is a dirty word,” Obama said and someone in the Council Bluffs crowd yelled: “Yes, they do.”

Obama suggested the “main idea” Republicans are presenting voters in 2012 is the “same old, top-down economics” that created the economic downturn. Late Monday afternoon during a speech in Boone, Obama amplified on that theme.

“They have tried to sell us this trickle down fairy dust before,” Obama said, “and it did not work then. It won’t work now.”

Last night, at about 7:30, Obama walked through one of the gates into the Iowa State Fairgrounds, talking with fair-goers and posing for pictures for about an hour before going into a beer tent and ordering a Bud Light.

Many in the crowd at one point joined in a “four more beers” cheer. Obama also ate a cold pork chop. The president-elect of the Iowa Pork Producers had been holding two pork chops on a styrofoam plate for 45 minutes, waiting to give them to Obama.