You are here: Home / News / Medicare is key topic on campaign trail today 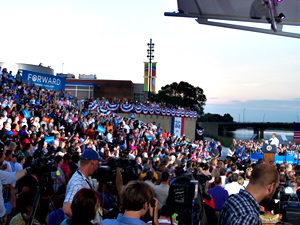 President Obama during a speech in Waterloo Tuesday.

The presidential candidates are tangling today over the government-run health care program for the elderly.

Republican Mitt Romney is running ads that accuse the president of cutting Medicare to pay for “ObamaCare.” During a speech in Dubuque early this afternoon, Obama shot back.

“They are just throwing everything at the wall to see if it sticks,” Obama said.”…Here’s what you need to know: I have strengthened Medicare. I have made reforms that have saved millions of seniors on Medicare hundreds of dollars on their prescription drugs,” Obama said, getting applause from the crowd. “I propose reforms that will save Medicare money by getting rid of wasteful spending in the health care system, reforms that will not touch your Medicare benefits — not by a dime.”

Romney chose Wisconsin Congressman Paul Ryan as his running mate this past weekend. Ryan is the architect of a budget plan that would change Medicare, giving seniors a stipend to buy private insurance. The crowd in Dubuque booed the idea when Obama mentioned it.

“That means seniors would no longer have the guarantee of Medicare. They’d get a voucher to buy private insurance,” Obama said. “And because the voucher wouldn’t keep up with costs, the plan authored by Governor Romney’s running mate — Congressman Ryan — would force seniors to pay an extra $6,400 a year, and I assume they don’t have it.” 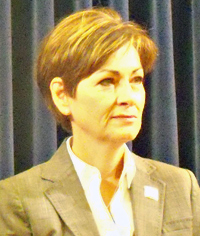 Over a dozen Romney supporters, including Lieutenant Governor Kim Reynolds, held a news conference on the steps of the statehouse about an hour after Obama finished speaking in Dubuque.

“Under President Obama, Medicare is projected to go bankrupt by 2024, which means that if you are 50 years of age or younger, when you are entitled to receive that, it will no longer be there,” Reynolds said.

This issue is likely to be an item of debate throughout the fall campaign, as older voters who know the most about the current Medicare system are key to victory in key states like Florida and Iowa.

“My plan’s already extended Medicare by nearly a decade. Their plan ends Medicare as we know it,” Obama said in Dubuque. “…Their plans makes seniors pay more so they can give another tax cut to millionaires and billionaires.”

“He can’t run on his record because there isn’t one. We’ve added trillions of dollars of debt that we’re passing on to future generations. We haven’t balanced a budget in three years,” Reynold said. “…He has had three years. He ran on hope and change and…there hasn’t been anything that has given hope to anybody.”

“I really think we have to look at that doubling as driving seniors to Medicaid,” Kramer said. “I hope that’s not a goal, but, you know, it begins to feel like one.”

Medicaid is the government-run program that provides health care coverage to poor Americans, regardless of age.

Obama is wrapping up his three-day tour through Iowa with an event early this evening in Davenport.