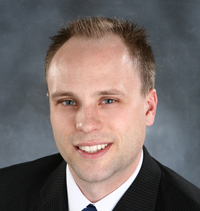 A man whose family hosted President Obama on their farm Tuesday afternoon says Obama is a “nice man” — but a “failure” as president.

Jarret Heil is a Republican. He is the Marshall County Treasurer and he will be a Mitt Romney voter this fall.

“The president is a very likable man. I think people like him in a personal way and I saw that yesterday, but there’s fundamental policy differences that I think in the middle of a campaign it’s important to note that there are those differences, that many Americans feel differently,” Heil told Radio Iowa this morning.

“To get caught up in personal moments is something you don’t want to get to when you’re in the middle of a presidential campaign.”

Heil’s father and grandfather greeted the president when he arrived at the Heil family farm near Haverhill — in full view of the cameras and microphones. Jarret Heil stayed away from the media, but met Obama when the president spent some private moments with the family in the farm’s machine shed.”The president came in and walked in and shook our hands and introduced himself to us. He shot a couple of baskets. There was a basketball hoop in the garage there,” Heil said. “Great guy, cool guy — just like everyone hears, that he seems to be a very cool, sociable guy and he really was.”

“We’re running record deficits,” Heil said. “The other thing is, you know, he’s kind of been a divider a little bit with our country. If you look at the Bush tax cuts, we’re kind of pitting the wealthy against the middle class.”

Obama has called for extending the tax cuts enacted during President Bush’s era only to those earning less than $250,000 a year. In his written statement, Heil said that will “crush small businesses, including farmers.”

Obama visited the Heil family farm to see its five wind turbines, which are part of a “wind farm” cooperative that stretches over 20,000 acres and includes more than 50 towering wind turbines. Despite his policy differences with the president, Heil says he didn’t consider rejecting the request for the president to stop by the farm.

Heil emailed Radio Iowa a photo of himself and a picture of the president on the farm, along with this written statement, last night.

As Obama made his way from Des Moines to Oskaloosa yesterday, Obama stopped in Knoxville to get coffee at a business run by another Republican. Obama’s State Fair visit on Monday night took him to the Bud Tent which is operated by a Republican, too. The beer vendor has complained that he lost $25,000 because his venue had been in a zone cordoned off by the Secret Service for the president’s visit, preventing new customers from getting in to buy beer.