You are here: Home / Sports / Vandenberg ready to lead new offense for Hawkeyes 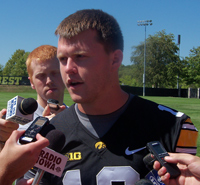 Iowa quarterback James Vandenberg says the Iowa offense will have a new personality this season.

Greg Davis replaced Ken O’Keefe as the offensive coordinator after O’Keefe joined the staff of the Miami Dolphins and Vandenberg says the changes are more than just schematic.

“Obviously we had a lot of success under coach O’Keefe, and he’s great coach. Personality wise they are little different. Coach Davis is a little more upbeat, in your face, running around with the receivers catching balls with the backs, he’s kind of a guy who brings a lot of excitement,” Vandenberg says.

“I talk about a spark all the time, I think he’s kind of sparked everybody in the meeting rooms and on the practice field.

Vandenberg says being a senior means he needs to take on a bigger leadership role this season. “We’re a young football team and a new offense, those are big enough challenges themselves,” Vandenberg says. He says his job is to make sure everyone is in the right place. 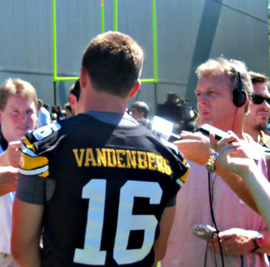 The running back spot is a question mark and a couple of true freshman could see the field this season. Vandenberg does not feel the lack of experience at that spot will hold the offense back. “All those guys that are here, whether they are true or fifth year seniors, they are plenty capable of doing that job. As good of coaches as we have and the older guys, we”l take them under our win enough they’ll be absolutely fine. whoever ends up winning that job,” Vandenberg says.

Vandenberg hopes to finish his career with a great season but has not set a goal in terms of wins. “The goal every year is to play to the best or your ability and I have a year of experience under my belt now…and I think we’re all just looking to build off what we did last year and take that next step,” he says.

The Hawkeyes open on September first in Chicago’s Soldier Field against Northern Illinois.