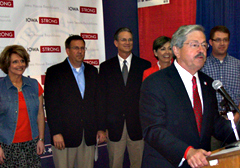 Governor Branstad talks about the unity effort as fellow Republicans look on.

Governor Branstad, the chairman of the Iowa GOP and the top Republicans in the legislature say they’re going to present Iowans with a “unified” action plan in November that will include tax cuts and education reform.

“We’re excited to outline our priorities going into this fall’s election,” Branstad said today during a news conference at the State Fair.

“By the beginning of October, voters will know exactly where we stand and how we will make Iowa strong if Republicans are elected to the House and Senate.”

“We’re kind of laying this out today at the 30,000 foot level,” Paulsen said. “You should anticipate that some time next month we will be laying these (ideas) out in greater detail.”

“One of the things we really want to concentrate on this legislative session is to promote job creation through a good regulatory reform,” Behn said today at the State Fair. “We also want to work hard on our tax relief and reform.”

Republican Terry Branstad is in his fifth term as governor, but he told reporters this is the first time he has joined with Republican legislative candidates in both the House and Senate to draft a unified campaign message.

“We intend to reduce the tax burden for Iowans,” Branstad said. “We intend to improve the education system for Iowans and we intend to build on the progress we’ve already made in getting our fiscal house in order and making sure we have a less expensive and more efficient and accountable state government.”

In response, Iowa Democratic Party chair Sue Dvorsky said Republicans “haven’t offered a unified message” in the past two years, with discord among Republicans over key issues and a new divide between the governor and the GOP chairman on the judicial retention election. Iowa Republican Party chairman A.J. Spiker has called on Iowans to vote against the retention of Supreme Court Justice David Wiggins because Wiggins joined in the 2009 ruling on same-sex marriage. Branstad has said he will not try to influence voters on the matter.