You are here: Home / News / Temperature records move from the high to low end 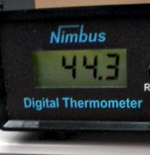 Temperature reading in the studio of Radio Iowa affiliate KQWC in Webster City.

Last month, Iowans saw an array of new record high temperatures set, but this morning, many of us woke up to the coolest weather since early June. Kevin Deitsch is a meteorologist at the National Weather Service office in Johnston.

“Most of the record lows were confined to northwest Iowa,” Deitch says. Sioux City’s record low this morning was 43 degrees, Lamoni was at 50 and Webster City reached 44.

The temperature in Webster City shattered the previous record of 46 set on this day in 1897.

For a welcome change of pace, Deitsch says Iowa’s weather will be pleasant for the weekend, the final weekend of the Iowa State Fair.

“Dry weather we’ve had makes it pretty easy to cool down at night and to warm up during the day and that looks to be the trend as we head through this weekend,” he says.

Highs will be in the 70s today through the weekend with lows in the 40s and 50s. There is no precipitation forecast for the next seven days.