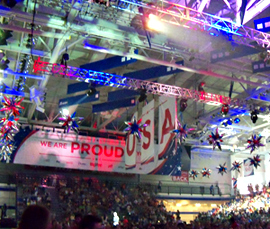 Banners hang in the Knapp Center at the welcome home ceremony for Olympians.

Thousands turned out in Des Moines Saturday to honor the five Olympians with Iowa ties at a homecoming ceremony.

Former Iowa State runner Lisa Uhl says it was exciting to see people lined up to get into the Knapp Center at Drake University two hours before the event started.

“I grew up about an hour and half away in Fort Dodge and it’s just great to come home and feel that warmth and really feel like, you know, you are where you belong…. I never feel more like myself than when I am in Iowa,” Uhl says.

Uhl never made a state track meet while competing in high school, but went on to win four 10,000 meter NCAA titles as a Cyclone and then made this year’s Olympic team.

Miranda Leek is the top-rated archer in the United States. She echoed Uhl’s comments about the welcome home. “It’s really great to be back…this was where I was born and raised in Des Moines. To see all the familiar faces, the friends and families that I grew up around and with and who have influenced my life so much. I mean everyone loves being back home, this is where the heart is,” Leek said. 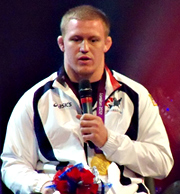 “Being my first Olympics it was a pretty cool experience. I’ve wrestled in two world championships so there’s not much difference as far as competition, it’s just you see big-time athletes like this,” Varner said.

“I guess it was kind of easy for the wrestlers because nobody really knows who the wrestlers are, so we’re the ones going up to these athletes taking pictures with them and they walk right by us and go ‘they’re just wrestlers’.”

Varner joked that the line was too long to get his picture taken with hurdler Lolo Jones, so he had to wait until the welcome home ceremony to get one. 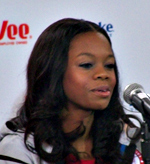 Gold medal gymnast Gabby Douglas said it was great to see the support as she returned to her adopted state.

“It was my first Olympics and I thought I had an amazing ride, an amazing journey, I’m so glad I got to be a part of this. I just want to thank everyone,” Douglas said.

She said it has sunk in that she won the gold medals in the team and individual gymnastics all-round competition.

“It’s definitely crazy, but you just think of all the hard work, sacrifices you put into the gym. And all the sacrifices that you make definitely are not in vain. I would say never give up and always keep pushing, always keep fighting, and the results will come up by themselves,” according to Douglas.

Douglas left her home in Virginia to come to West Des Moines to be coach by Liang Chow. Chow also coached Iowan Shawn Johnson to an Olympic gold. He said the exposure has made him more visible and told a story about calling to get his phone fixed.

“The lady, she says ‘who are you?’ I said I am Liang Chow. She said ‘oh congratulations’,” Chow explained. He said being recognized like that was “pretty freaky.” Douglas and Lolo Jones got the most attention of the group from the national and international media.

Douglas says it is hard to stay away from the negative comments people make, but she says you have to not take them to heart. “You can’t let them bring you down, you have a job to do in London, you have to deliver at that right time. And you just have to stay strong and don’t focus on what everyone is saying over here, just do your job and focus on you,” Douglas said.

Lolo Jones drew some animosity from teammates because of all the attention that she received, even though she did not win a medal.

That included an interview by teammate and silver medalist that was critical of Lolo. Jones said she did not get a chance to talk with her teammates about the issue.

She said she ran into her teammate before knowing about the interview, and then figured they would meet later in Europe, but Jones season ended early and she will not meet up with them anytime soon.

Jones said she will not try to mend the bridge with her teammates. “I felt the resentment before and I’ve actually reached out to them before and honestly, I thought the bridge was mended, and to see them kind of blow it up, them break it, I’ve done my part,” Jones said.

Jones said she is moving on. “I honestly have no hard feelings, I understand their feelings,” Jones said.

She said she fought hard to get a medal and that is what everyone wants and she doesn’t care about the publicity. “That medal is something we fight hard for. We don’t fight for fame, to be the most famous athlete we fight to represent our country and get that medal bring that medal back to team U.S.A. They did that, and I’m just kind of shocked that they aren’t happy with it, I don’t understand it,” Jones said.