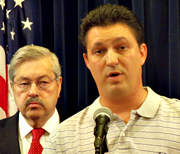 Governor Terry Branstad has signed an executive order that creates groups that allow public input when rules are created for new laws. Branstad, a Republican, says a law intended to help people can end up hindering some when the rules are developed to carry out the law.

“The biggest problem with administrative rules is unintended consequences. When they do something and the people on the board

The governor says “stakeholder groups” are specifically aimed at small businesses that don’t have lobbyists at the statehouse. “And this is designed to get input from them so that you have that stakeholders who are directly affected by these regulations be able to give their input and impart the knowledge and experience that they have to the people who are making the regulations. We think this will make for better regulations, less red tape and more common sense,” according to the governor.

Des Moines home builder Denny Marchand, appeared with the governor at his weekly meeting with the media and told about the problems he faced with his plumbing license. “When my license was up for renewal, I worked to make sure my license remained active. The process was confusing and I thought I was in compliance. However, I called the plumbing board and was informed my license expired two months prior,” Marchand explained.

“I was informed that I either had to take an entire exam and pay for it or ask for a waiver. My waiver was denied and I will be going to the plumbing board meeting tomorrow to appeal that decision.” Marchand says if you are small business owner  it is tougher to find out information on these issues and he would like to be able to give his input.

“I have been frustrated with the process and I know other plumbers who have had the same problem I have had because we feel we do not have a voice,” Marchand says. “I am a good plumber and I want to get back to work. Because of this burdensome regulation I have to pay other people to do the plumbing when I could do it myself. This regulation has hurt me, my business and my family’s income.”

Governor Branstad says the new stakeholder groups would only be used during the regular rule-making process and would not apply to emergency rules.