You are here: Home / Human Interest / Iowans return from missionary trip to Cuba 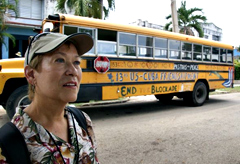 A central Iowa couple has just returned from a ten-day trip to Cuba.

Will and Marjorie Groves, of rural Kamrar in Hamilton County, were part of a delegation of 16 Americans on a missionary trip through Global Ministries. Marjorie Groves says one of the first things she noticed was that all of the cars in Cuba are decades old, from prior to the U.S. embargo of the island nation.

She says, “That’s what people are using for taxis and private cars, these American-made cars date from 1959 and before.”

The Groves are members of the First Congregational United Church of Christ in Webster City. She says part of the trip was devoted to visiting partner churches. She says Christianity is flourishing in Cuba.

“It’s continuing to grow,” she says. “In the United States, it seems like we’re having something of a decline, but we noticed that there were a lot of younger people in churches, especially the Pentacostal churches.” Groves says members of the delegation spent time meeting with religious officials in Cuba and worked on projects in the rural sections of the country.

She says when the U.S. is ready to change things, Cuba is ready, too.