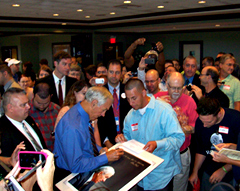 Texas Congressman Ron Paul rallied with about 399 supporters this morning, including most of the Iowa delegation attending the Republican National Convention in Florida.

“It is a tremendous incentive for everybody to work harder.”

Paul finished third in Iowa’s Caucuses with 21.5% of the vote.

While the other major competitors for the Republican Party’s presidential nomination have released their delegates and endorsed Mitt Romney, Paul has not. Paul never once mentioned Romney during his remarks this morning and he urged his supporters to continue their efforts to remake the Republican Party.

“All the victories are important, but they aren’t the end game,” Paul said. “The end game is who wins the war and, if you see it as an intellectual war, I’ll tell you what: we are way ahead.”

Iowa delegate Andrea Bie of Waterville agrees that Paul’s supporters are engaged in an intellectual war within the GOP.

“It goes against the grain of what we’re all taught and that kind of aggressiveness that humans have, you know, the inquisitiveness and the greed and fear,” she says. “And the American people has been played with for a long time.”

This morning’s event was the Iowa breakfast at the Republican National Convention, but the majority of the crowd came from other states and those out-of-staters were Ron Paul supporters. The Iowa GOP’s chairman — a staffer on Ron Paul’s Iowa Caucus campaign — has agreed to try to help 10 delegates from the state of Maine who supported Ron Paul, but were removed from the roster of convention delegates by party officials who cited irregularities in Maine’s delegate selection process. Eric Brakey, the director for Ron Paul’s campaign in the state of Maine, is one of the 10 demoted delegates, but he came to Tampa anyway, hoping to get into the convention somehow.

“The Iowa GOP has graciously opened its arms to the Maine delegates after they witnessed the injustice that happened to us,” Brakey said. “…We want to be able to say we exhausted every option, every route possible.”

The Club on Treasure Island, Florida — near the Iowa delegation’s hotel — was the site of this morning’s event — and a light rain fell as guests arrived. Today was to have been the opening day of the Republican National Convention, but party officials announced on Saturday convention events for day one were cancelled, due to the approaching tropical storm Isaac.