You are here: Home / News / Branstad says Romney’s nomination is what most will remember from convention 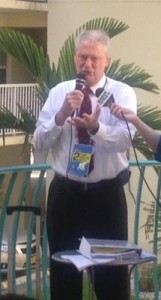 Presidential candidate Mitt Romney will be formally nominated late this afternoon by delegates at the Republican National Convention and Iowa Governor Terry Branstad is among the delegates who’ll be casting their votes for the nominee.

“I’m voting for Romney,” Branstad said this morning. “It’s a foregone conclusion how it’s going to turn out.”

However, most of the rest of the Iowa delegation in Tampa will be voting for Ron Paul. That’s the name delegate Roger Leahy of Fairfield hopes to write on his ballot.

“It’s not much of an election if there’s only one choice,” Leahy said. “I’m hoping that there’s at least a choice of ‘none of the above’ or ‘abstain’ or a write-in vote for Ron Paul.”

No other candidate will have their name placed in nomination, so any votes cast for Paul will not be part of the official convention record. Iowa delegation chairman Drew Ivers of Webster City led Ron Paul’s Iowa Caucus campaign and he’s encouraging the Iowa delegates to follow their convictions, but with the realization that Ron Paul isn’t going to win.

“I mean, the very nature of politics is difference of opinion — different candidates, different ideas, different opinions, different solutions — and so I’m all for that,” Ivers said this morning. “I’m all for diversity and expression of that diversity and I’m also all for majority rules, so if you’ve got the greatest idea in the world and you get 49 percent, you lose and say, ‘Hey, better luck next time.'”

Governor Branstad dismisses the idea the Iowa delegation’s split vote this afternoon will be a black eye for the state.

“Who ever remembers how the delegates voted in the end anyway?” Branstad said this morning. “They just remember who’s nominated.”

“We expect a lot of people to vote for Romney and hopefully all of us will vote for Romney,” Krishna said. “I mean, a couple of hours is an eternity in politics.”

However, Iowa Republican Party chairman A.J. Spiker, a Ron Paul campaign staffer during the Caucuses, said behind-the-scenes hijinks from “party establishment” types trying to rewrite the rules for future elections scuttled any possibility the Paul supporters would cast a ballot for Romney this afternoon.

Iowa Lieutenant Governor Kim Reynolds is the convention secretary and she’ll be on the podium, leading the roll call of the states to complete the party’s nominating process.