You are here: Home / Agriculture / Harvest time in August? Yep, thanks to the drought 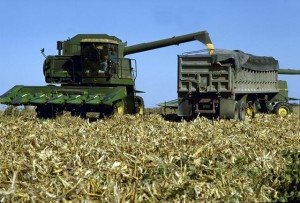 The worst drought in decades has dried up many crops and is forcing combines into Iowa’s corn fields in one of the earliest harvest seasons in memory.

John Holmes, an agronomist with Iowa State University Extension in Clarion, says odd as it may seem for late August, harvest season has arrived for many farmers.

“Some of these crops are finally running out of moisture,” Holmes says. “We have corn that is being harvested in some instances, some is being chopped and we have soybeans that are continuing to hold on, which is good.”

While parts of Iowa saw rain over the weekend, mostly dry and hot conditions are in the immediate forecast. Holmes says the rainfall, what there was, should revive some crops.

“It’ll help the corn that’s still alive and it’ll help the beans for certain,” he says. “In every case, it will help the subsoil moisture reserve. We may have some crops that it’s too late for but an awful lot of them are still holding on and they’ll benefit from the rain.”

Last year, Iowa’s corn growers hauled in 172-bushels per acre, on average. This year, Holmes says the early harvesters in north-central Iowa are seeing much, much lower yields.

He says one farmer near Farnhamville was getting 85 bushels per acre last week though a plot near Lake City was only bringing 55 to 60 bushels.

Some analysts predict this weather pattern will persist into October while others say, the drought may hold through spring.