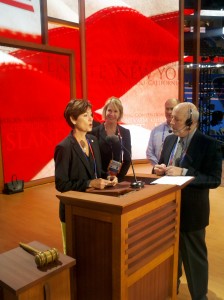 Iowa’s lieutenant governor will be in the spotlight today at the Republican National Convention in Tampa. Lieutenant Governor Kim Reynolds will serve as the secretary of the convention.

“I get to do the roll call,” Reynolds said in a conversation with two Iowa reporters who’re in Florida to cover the convention.

That means at about 4:30 Iowa time this afternoon — when it’s time for the convention delegates to cast their votes for president, Reynolds will be center stage, behind the microphone, calling out to each state delegation and asking for their votes.

“This is my first convention, by the way, so this is just so exciting,” Reynolds said.

Reynolds, as the secretary of the 2012 Republican National Convention, must sign the formal paper ballot from each state. If Mitt Romney wins the presidency, that paperwork might wind up in a presidential library — or perhaps in the Smithsonian in Washington, D.C.

“Maybe when my grandkids get a little bit older we can take a trip out east and I can show them where grandma’s name is in a book somewhere,” Reynolds said, with a laugh.

The roll call is scheduled to occur before prime time coverage of the convention starts, and Reynolds may have to move things a long if the people who announce the vote totals from each state drag the process out.

“I haven’t been to a convention before,” Reynolds said. “I’ve watched it, you know — I’m a political junkie so I’ve participated, but from my home. I don’t miss them, so it’s just an unbelievable honor.”

Reynolds has been given a large silver lapel pin that looks a bit like a military medal to wear tonight.

“Oh, here’s another really neat thing about it, too: I’ve got a pretty good seat for the convention,” Reynolds added, noting she’ll be sitting “to the left” of where the convention speakers will be standing this evening. “That’s pretty awesome, too.”

Reynolds, a former county official, served two years in the state senate before Terry Branstad asked her to be his lieutenant governor/running mate in 2010. The chairman of the Republican National Committee called Reynolds nearly two weeks ago to ask her to serve as convention secretary.

“It’s a great way to highlight Iowa. I think they understand that Iowa’s an important state. It’s a swing state and we have an opportunity to deliver Governor Romney for them,” Reynolds said. “I think that was just one way for them to maybe acknowledge that, so it’s an honor for Iowa.”

There is a possibility some Iowa delegates may abstain from voting for Mitt Romney when the convention roll call is taken tonight, as a majority of the Iowans at the convention support Ron Paul. Senator Grassley, a delegate who will be voting for Romney, downplays the idea there’s any controversy.

This is the eighth time Grassley has attended his party’s national convention.