An estimated 6,000 people turned out on the central campus of Iowa State University in Ames this afternoon for a campaign appearance by President Barack Obama.

The Democrat tailored his remarks to the student-heavy audience, telling them the will be a big part of the November election.

“Just over two months from now, for the first time in most of your lives, you will get a chance to pick a president,” Obama said.

“And the truth is, you’ve got more at stake in this election than just about anybody. When you step into that voting booth, the choice you make in that one instance is going to shape your country and your world for decades to come.”

Obama won Iowa four years ago with the help of a good turnout by younger voters. He told the crowd in Ames the campaign will get ugly as Republicans blame him for all the troubles of the country in an attempt to discourage young people from coming out to vote.

“And they’ll tell you that if you believed in change four years ago, your faith was foolish and you were being naive and last week my opponent’s campaign went so far as to write you off as a ‘lost generation.’ That’s you according the them,” Obama paused as the audience booed. 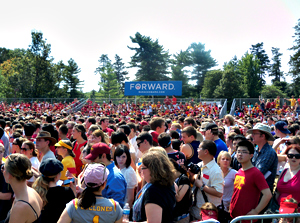 “And what they hope is that by telling you those things, you’ll get discouraged and you’ll just stay home this time.”

Obama said he’s gotten a start on solving the country’s problems, but needs another term to do more.

He told the crowd they were the ones that voted him in to make the changes that included the federal health care law and the end of the war in Iraq.

“Today that war is over as promised. More troops are home with their families, earning their educations through the post 9-11 GI bill, starting new businesses. And no one every again will have to hide who they love in order to serve the country they love because your vote ended ‘Don’t Ask Don’t Tell’ once and for all,” Obama said, as the crowd applauded he added: “You made that change.” 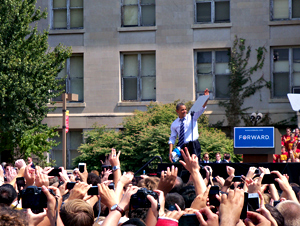 President Obama waves to the crowd after his speech.

The president brought the 20-minute speech to an end with one final call for the young people to be turn out in November.

The outdoor location left the thousands of people waiting a couple of hours in the heat for the president to arrive.

Several people were overcome by the heat, but an Iowa State University spokesman said none of the problems appeared to be serious. Obama is scheduled to be back in Iowa on Saturday for stops in Des Moines and Sioux City.

There were some students who support Republican Mitt Romney who showed up outside the event.  The Romney campaign also took out a full page ad in the Iowa State Daily criticizing Obama’s policies, saying “Obama’s brand of hope and change has failed the youth of America.”