You are here: Home / Sports / Iowa coach says team has potential despite lack of experience 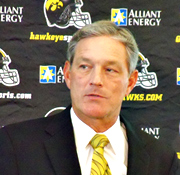 The Iowa Hawkeyes open a season full of question marks this Saturday when they play Northern Illinois in Chicago’s Soldier Field. Iowa coach Kirk Ferentz says they’ve had a productive preseason and the players and coaches are ready for a game.

He says the players were probably ready for a game two or three weeks ago as it always seems like it takes a long time to get the season underway. As he prepares to start his 14th season as coach this will be the fewest number of seniors a Ferentz coached Iowa team has had in the starting lineup.

“But at the same time we have guys like James Morris or Kirksey, you know we’ve got juniors that are capable of playing like seniors and acting like seniors, which is important too,” Ferentz says. He says the seniors that may or may not start are giving them a good leadership base.

Despite a lack of experience Ferentz feels this Hawkeye team has potential. He says every step will be an adventure and learning experience, but they need to maximize their opportunities.

Freshman running back Barkley Hill was lost for the season with a knee injury. Ferentz plans to rotate sophomore Damon Bullock and freshmen Greg Garmon and Michael Malloy against Northern Illinois.

The biggest concern going into the season is a defensive line which has only two players with starting experience in the two-deep. Ferentz says he expects to play 6 or 7 guys through the course of the game. This is the second time in five years Iowa has played Northern Illinois in Soldier Field and Ferentz says it is a better option than other road games.

“You’re playing in a pro stadium which I think is exciting to players, I think they like that opportunity just based on some of the bowl games we’ve played in pro stadiums,” Ferentz says.