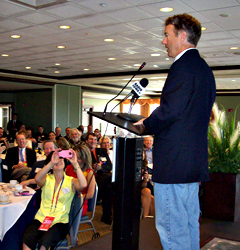 Kentucky Senator Rand Paul is urging his father’s supporters in Iowa to stay in the Republican Party.

Most of the Iowa delegates at the Republican National Convention supported Ron Paul in 2008 and this year as well. They gathered in a banquet hall on Treasure Island, Florida for breakfast this morning, awaiting the arrival of Ron Paul’s son.

“Now I had heard there were some troublemakers in Iowa and as I was driving the hour and a half out here, I figured, ‘Boy, they stuck those guys way out in the wilderness,'” Rand Paul joked as he began speaking to the crowd.

But Paul quickly urged the crowd to tamp down the ranting and raving and consider the perspective of those who’ve criticized his father’s supporters.

“Politics is messy. You can look at it two ways,” Rand Paul said. “Some would say — and there is some point to this — Ron Paul got a very small percentage of the vote, but got a much larger percentage of delegates. It’s because they worked hard and they got through the system, so you could argue they had a disproportionate influence here. Now, I’m not arguing we had too much influence, but you can look at it both ways.”

Many Ron Paul delegates at the convention led a screaming protest for several minutes Tuesday to express their displeasure over Republican National Committee’s decisions. Some have suggested they will not vote for Mitt Romney in November. Others say they may vote for the Libertarian Party’s presidential nominee. Rand Paul, who was not the Republican Party “establishment” pick when he ran in Kentucky for the U.S. Senate, nonetheless urged Ron Paul backers to stay in the GOP.

“Now some get unhappy at the proceedings and say, ‘Oh, I’m not being treated fairly. I’m going to take my toys and go home,'” Rand Paul said. “I don’t think that’s the best way to do it. I think the best way is to participate within the Republican Party whether you’re always getting what you want or not. If you’re an adult, you don’t always win every time. You’ve to realize that. Stay in the party. Make the party bigger and stronger.”

While Rand Paul has endorsed Mitt Romney and is scheduled to speak tonight on the convention floor, his father has said he cannot “fully” endorse Romney. After his speech to Iowans this morning, Rand Paul told reporters he expects only “a minority” of Ron Paul supporters will wind up voting for Libertarian presidential candidate Gary Johnson in November.

Iowa delegate Michelle Bullock of Ankeny, a Ron Paul supporter, isn’t sure which presidential candidate she’ll vote for in November, if any.

“It’s way too early,” Bullock said. “I haven’t even thought about it anyway.”

“I really hope that everyone…that would be from what I would term the constitutional wing or the establishment wing could come together,” Whalen said, “and I think that the history suggests that third parties and third party candidates and the ideas that they represent do not last long and are not successful.”

Whalen described himself as a “newly active” member of the GOP, and he hopes there can be a “reconciliation” of the two sides.

“I want to see the two groups play nicely,” Whalen said. “We must not be enemies. We must be friends.”