You are here: Home / News / State parks already filled up for the holiday 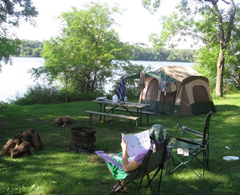 Most of the reservable campsites with electricity in Iowa’s state parks have been claimed heading into the last big weekend of the summer recreation season.

“I wouldn’t be surprised if by Thursday afternoon things were really tight…it’s going to be difficult to find a spot if you don’t have it secured already,” Szcodronski said. Although the drought this summer has hurt Iowa’s ag industry, it’s led a boom in business for state parks.

“Park use goes up when it doesn’t rain,” Szcodronski said. “I do know the peak of that hot time, when it was above 100 degrees, the tent campers…they stayed home because it’s pretty tough when it doesn’t get below 80 degrees in a tent.” Many of the state parks will experience a significance drop off in visitors after this weekend, but other thrive in the fall months.