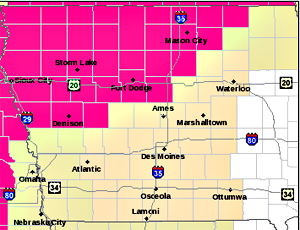 The areas in red on this National Weather Service map are under a warning for extreme fire conditions.

About a third of the state, 32 counties across western, northwestern and northern Iowa are under a Red Flag Warning today due to the risk of extreme fire conditions.

Donovan says crops are susceptible and highly combustible as they’re very dry and nearly cured so any fire that develops in a ditch could quickly spread, fueled by the very hot weather and strong, gusting winds.

He says residents across Iowa should avoid any outdoor burning today and farmers need to be especially watchful.

A farmer harvesting who hits a rock could spark a fire, it’s that simple, he says.

High temperatures across Iowa are expected in the upper 90s and low hundreds today. While Sioux City hit 101-degrees on Wednesday, Mason City set a new record high with its reading of 97.