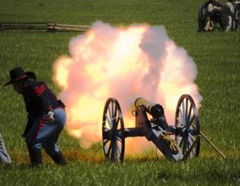 The largest Civil War reinactment in Iowa is underway today and through the weekend in the southern Iowa town of Lamoni. The town’s Civil War Days is marking the war’s sesquicentennial, as it lasted from 1861 to 1865.

Event organizer Doug Jones says they’re in the midst of showing a different face of the war in each of its four years. At the beginning of the war, it was very chaotic and no armies had been formed and militias were just being formed and no one knew what was happening, he says.

By 1862, the year being remembered this year, large armies were appearing and as the armies clashed, casualty numbers quickly rose. Jones says Civil War Days is an experience like you won’t find anywhere else. “You learn things but it’s not like a classroom,” he says.

He says the reinactors are very dedicated to accuracy in depicting life at that time, transporting visitors back to the 1860s. People know about reinactments, with armies fighting, but this is “a lot more than just guys with guns,” he says. Offerings this weekend include: civilian activities from the Civil War era, tradespeople, activities, potters, weavers, spinners, broom makers, blacksmiths and a period dance.

There are also period toys, even a period fashion show. Parking and admission are free. Friday is kids day with many kids activities and hands-on projects. Saturday will feature two battles, the first at 7:30 A.M.in downtown Lamoni and the second at 2 P.M. at the battlefield next to Home Pond. Another battle will take place on Sunday at 1 P.M.

For a full schedule of events, maps, and directions, visit: www.civilwardays.org.