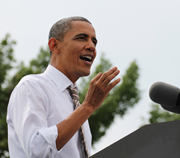 President Obama spoke to about 10,000 people early this afternoon at Living History Farms in the Des Moines suburb of Urbandale.

“Iowa, this is our first stop on the road to our convention in Charlotte, North Carolina,” Obama said. “But there was a reason for me to begin the journey right here in Iowa, where it first began…and it will be you, Iowa, that choose the path we take from here.”

Obama, who has said he did not watch this past week’s Republican National Convention, nonetheless offered a critique of what Mitt Romney and Paul Ryan said in Tampa. 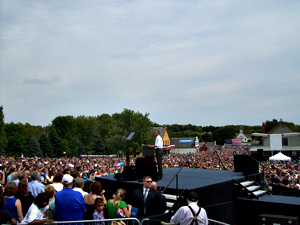 “What they offered over those three days was more often than not an agenda that was better suited for the last century,” Obama said.

“It was a rerun. We’d seen it before. You might as well have watched it on a black and white TV.”

Obama suggested little substance had been revealed at the GOP affair.

“There was a lot of talk about ‘hard truths’ and ‘bold choices’ but nobody ever actually bothered to tell you what they were,” Obama said, laughing along with the crowd.

“And when Governor Romney had a chance to let you in on his secret, he did not offer a single new idea, just retreads of the same old policies that have been sticking it to the middle class for years.”

But when the crowd started booing when Obama first mentioned the Republican convention, Obama shot back. 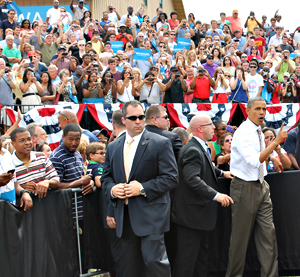 Obama and his campaign apparatus in Iowa are focused on “early voting” which starts at the end of this month in Iowa.

Obama campaign staffer Kevin Patrick spoke to the crowd about an hour before the president, asking for people to raise their hands if they were registered voters.

“Iowa is the first in the nation to vote,” Patrick said. “That means in 26 days we will get this chance to vote early.”

Patrick directed people in the crowd to Obama campaign staff roaming around with clipboards.

“The reason we want you to vote early is so that you can go help us get other people to the polls. We don’t want you worried about on election day (that) ‘I haven’t voted yet.’…Does that make sense?” Patrick asked and many in the crowd replied: “Yes.”

Obama is due to speak at Morningside College in Sioux City this evening.

A spokesman for Romney’s campaign suggested Obama’s taken the country “on a road to declining incomes, higher unemployment and more uncertainty for the middle class.”