You are here: Home / News / Iowa Democrats tout “Be the First” 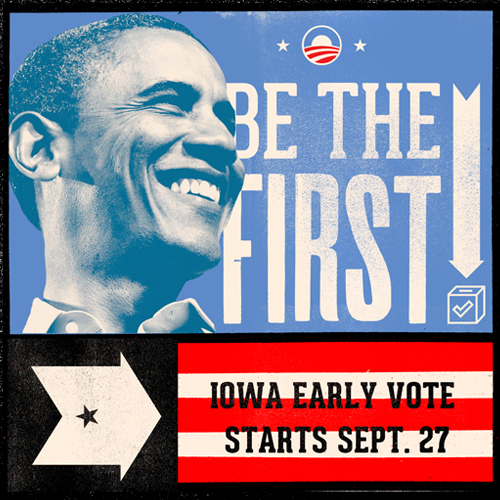 Iowa Democrats at their national convention in Charlotte are wearing stickers that read: “Be the First.” Iowa Democratic Party chairwoman Sue Dvorsky says it’s not about Iowa’s first-in-the-nation Caucuses.

“It is be the first to cast your vote for Barack Obama,” she says.

Iowa law allows voters to start casting ballots 40 days before Election Day, either at their county auditor’s office or at satellite voting stations set up in places like public libraries.

“That means that the first vote for Barack Obama, for his reelection, Obama/Biden — the first vote cast in the country — will happen on September 27th,”Dvorsky says.

Obama himself made the “early voting” pitch this past Saturday in speeches in Urbandale and Sioux City. Dvorsky started handing out the “Iowa First” voting stickers on Sunday.

Iowa is among the second state Obama will visit after this week’s Democratic National Convention concludes Thursday night. Obama, First Lady Michelle Obama, Vice President Joe Biden and his wife, Jill, will visit New Hampshire Friday morning and later Friday all four will appear at a rally in Iowa City.